Lucky Dog 1 (ラッキードッグ1) A new 18+ BL game created by Yura‘s doujin circle Tennenouji was released recently on 10 June 2009. With a damage of 4,935 Yen (w/tax), Comi-comi shipped it out real quick and it comes with a Tokuten/Special mini drama CD (Bakshi x Gian), so I got my hands on it early last week. Alas… I have yet to install the game… so much work to do and if I have it installed, the temptation to play the game would be too great *_*

What is the story about? Well… there’s something about four main guys of the mafia being captured and thrown into prison one after another… and something about the hero (who is also a prisoner. He should be the main uke but he gets to top other characters, it seems) given a chance of a lifetime. Being the “Lucky Dog”, if he manages to break out of prison with the other four prisoners successfully, he gets to become the mafia boss. Not too sure hahaha… talk about impulse buys ^^;;;

Lucky Dog’s promotional video is very well edited. Looks like a fun ride (or escape hehe). Have a quick peek at it here:

Packaging of the game was kinda plain with only the usual DVD case and a few page booklet/game guide. A little disappointing but the cover art is beautiful.

Yura’s art is bright, energetic and attractive. I really hope she did away with the -massive- hips on the boys this time. I was quite irked by it and went “my eyes my eyes!!!” when I played Zettai Fukujuu Meirei a.k.a. Absolute Obedience *_*

Yusa Kouji is one of the main reasons I bought the game. Although he has many BL drama works, it is relatively rare to have him voice BL games… from what I know so far, he was in Koibito Yugi (nope, I don’t have it), Kichiku Megane and Kichiku Megane R (deeeelicious!) and Sweet Pool (he is a non-H character here tho’)

Since this is Lucky Dog 1, there’ll probably a sequel? Anyway, a BLCD titled Lucky Dog 1: Summer Chance is slated for release in August 2009. I’m still debating if I should preorder it.

A note about the Bakshi x Gian mini drama… “one-eyebrow” raising. Bullying in prison. Couldn’t recognise the seiyuu who voiced Bakshi. Well, I would rather have the Bernardo x Gian one (and they’ll go~ “Honey” and “Darling” like they did in the game hahaha) but it only comes with animate order which… unfortunately doesn’t ship internationally =_=

Update: There are 3 stages to clear… Prison Break, Road to Escape and Daivan (what’s that?) and you try to build your relationships with the 4 guys along the way :)

Lucky dog 1 manga, artwork by 渦八 and story by Tennenouji 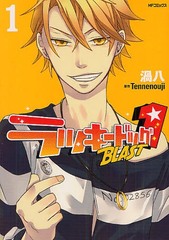 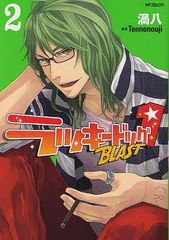