Countdown voices added! Have you received your copy yet? :D

The game is set in a fantasy universe where the world is made up of a huge continent split into four kingdoms inhabited by 98% of the world’s population. Controlled mainly by four “Kings”, each king possesses a specific ability named Galita (ガルティア) that has four different characteristics which influence how the society and culture of each country develop. As resources in the world start to deplete, the shadow of decline looms in the background. What will the future hold for the world, and the “King”?

A promising BL game by a brand new BL game company, GRISEDGE. It seems like fantasy BL with potential RPG elements. The “Kings” setting remind me of K the anime whose first season ended recently though.

Only about 3% of the world’s population possess Galtia ability. Out of these, one insignia of each ability type, called the “King’s Crest” will appear only on the body of persons who are the strongest. This evidence shows that the person is “King”. The next 13 strongest persons are called “Numbers”. In most instances, these people would be in positions of power. Countries prosper under the influence of the “King” and decline in his absence.

The four countries/abilities are generally summarised as follows (some translated names are not official):

1) Diamante ディアマンテ
Most technologically advanced and active in trade and commerce. Known as the country of merchants and citizens with a vibrant subculture. It’s ruler, the “Sun King” 陽王 is a mysterious presence absent from the political scene. People of “Diamante” have the ability to “alter application” – Transmutation? 変化応用系の能力が主体のディアマンテ人。

2) Vastunie バストゥーニ
Ruled by Sieg ジーク, the “Black King” 黒王. The military country has the strongest army among the four and is currently expanding into the borders of Kruez, a weakened country. A sign of impending war. As the country tends to place great emphasis on abilities, it faces a problem of social divide between people of strong and weak abilities. It has the largest ore mines in the world and an excellent heavy industry. People of “Vastunie” have the ability to enhance attacks. 攻撃強化系の人。

3) Quarry クウォーリー
A religion state which has a religious holy place with the largest number of believers in the world. According to historical records, this is the longest ruling country among the four and ruled 80% of the whole continent during its golden age. The “Holy King” 聖王, Laurus ラウルス currently enjoys fervent public support as the king and religious leader of the country. People of “Quarry” have telepathic ability. 精神感応系のクウォーリー人。

4) Kreuz クロイツ
The country posseses the largest land area and population. Rich in nature, it is a huge farming country. Due to a certain global incident, their “King” is now absent. As a result, the land and country is in steady decline. It has a deep-rooted spiritual history of nature worship although it is not an organised religion. It is said that this country may be the oldest in the world. As the country is substantially weakening, refugees continue to leave in unstoppable droves. People of “Kreuz” have the ability to strengthen defence. そして、防御強化系のクロイツ人である。

The character design kinda reminds me of the boys in Spray’s Gakuen Heaven 2 Double Scramble.

Shin シン (CV: 河村眞人/Yamanaka Masahiro 山中真尋 Voice of King in Ariard -Shounen Alice-) From Diamante. Protagonist. Height: 174cm (His height setting is screaming to the world: “I’m UKE!!!”)
Appears cool and calm for his young age. Man of few words. Jack-of-all-trades freelancer who takes jobs from the guild. (Reminds me of Akira from Togainu no Chi)

Senri センリ (CV: 四ツ谷サイダー/Okitsu Kazuyuki 興津和幸) From Diamante. Height: 179cm.
Shin’s childhood friend from the orphanage. Cheerful and gentle young man. One-sided love towards Shin. Well-liked by others due to his personality. Feels a pressing need to protect Shin from the claws of guild master, Diago (lol~). During the day, he teaches at the orphanage and works for the guild at night. (Seems like Keisuke with yandere potential.)

Zeek ジークハルト・エーヴェルシュタイン (ジーク) (CV: 鳩マン軍曹/川原慶久 Kawahara Yoshihisa) From Vastunie. Height: 183cm.
Black King of Vastunie. Known for his strict and authoritative demeanor. He is expressionless and does not display any emotions. He killed his brother who has the most potential to become the next king. Ambitious and does not hide his intentions to expand his country’s territory by war.

Laurus ラウルス・ヴィ・クウォーリー (CV: 佐藤タカ/梯 篤司 Kakehashi Atsushi *Thanks SnowMiyu for the headsup) From Quarry. Height: 178cm.
King and religious leader of Quarry and has overwhelming support from his citizens. He tries to modernize the politics in the country by introducing the separation of Church and the state. He became the king at 12 years old and has the longest ruling history among the four. He is known for his good looks, personality and gentle demeanor but… (He most probably has a kichiku dark side lol~)

Diago ディアゴ (CV: 縞馬男爵/Mamiya Yasuhiro 間宮康弘) From Diamante. Height: 188cm.
Guild master of Al Mars アルマース, the largest guild in Diamante and the world. Calm and generous. He comes and goes as he pleases and appears to be aloof from the world. A walking babe-magnet thanks to his overflowing supply of pheromones. Hates work and is called a “useless” adult.

Zenox ゼノ (CV: 先割れスプーン/鳥海 浩輔 Toriumi Kousuke) Not a citizen of any country. Height: 180cm.
Ultra-first-class assassin from Al Mars who carries out assassinations, political schemes and other shady jobs. Doesn’t like being in a group, preferring to work alone. Unpredictable. He is completely exempted from following strict guild laws and rules. Not even the guild master Diago can control him. But due to his exceptional abilities, no one raises any objection to it.

Aldo アルド (CV: 華雄) From Diamante.
Number 3 of Al Mars. Licht’s childhood friend. He is well-liked by the guild members who look up to him as a big brother. 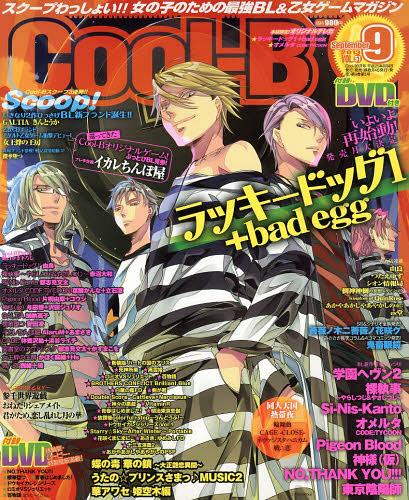