The news that Sex Pistols (manga by Kotobuki Tarako 寿たらこ) is going to be made into an OVA isn’t new… I haven’t been following the developments closely but I just found out that Hatano Wataru was cast as Fujiwara Shiro opposite Sugita Tomokazu‘s Madarame Yonekuni!

I fell in love with Shiro when I read the manga… he is such a sexy uke without intending to ^^ and his seme is pure manly goodness. I’m so looking forward to the massive nosebleed it is going to induce when the 2-episode OVA is released. 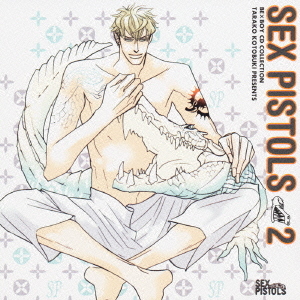 Although I’m excited about the new cast, I’m going to miss the original cast for the drama cd, Koyasu Takehito x Hirakawa Daisuke who were both very lovely as the characters. Koyasu Takehito gave Yonekuni a cold and aloof presence and paired well with Hirakawa Daisuke’s perfect rendition of the gentle but very erotic Shiro. You’ll bleed buckets if you hear his uke moans in the drama cd. But I think the new cast would be yummy too. (^///^) HATANO-SAN!!!! He is one of my top fav uke now. If you’ve not listened to his uke before… gosh you don’t know what you’re missing. As for Sugita Tomokazu, he has a deep voice similar to Koyasu Takehito and I believe he can bring out the aloofness of the character. He was pretty good as a seme who gave the uke the cold shoulder in the BL drama Utsukushii Koto 美しいこと ^^

Update: The cast for the other couple is revealed. Shimono Hiro will replace Suzuki Chiiro (鈴木千尋) who was the original cast in the drama CD as Tsuburaya Norio. Kawahara Yoshihisa (KYAAAA~ Tetsuo from Sweet Pool!!!) XD will voice Madarame Kunimasa in place of Yanada Kiyoyuki (梁田清之).

Both Hatano Wataru and Kawahara Yoshihisa are in Sex Pistols OVA! But not as a couple this time…

Anyway, Sex Pistols is an innovative story with the premise that 30% of humans are descended not from apes but from other animals (these people are called “Zoomans”), and they can interbreed with humans, and with other male Zoomans by the use of a symbiote (Definition: an organism in a partnership with another such that each profits from their being together) . Although the manga began with Tsuburaya Norio, an ordinary high school student who discovers his Zoomanity and deals with the advances of many male Zoomans who want him to have their babies, the OVA seems to be making one of the other couples Madarame Yonekuni and Fujiwara Shiro as the focus. (Info edited from wiki)

Summary from Anime News Network: Madarame Yonekuni and Fujiwara Shiro have this awkward tension whenever their eyes meet at school. Since Yonekuni cannot openly explain to Shiro why he feels uncomfortable whenever he’s around, he must coerce his brother, Madarame Kunimasa to reveal the truth. Is Yonekuni tough enough to handle it?